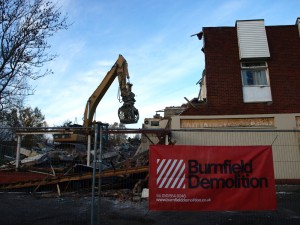 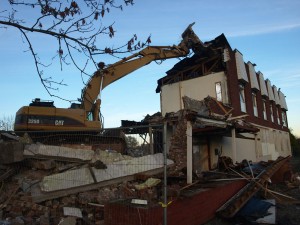 Bonfire night brought about an unexpected call out for Burnfield Demolition’s Emergency teams when building control requested their attendance to a major fire at the former Mount Royal Hotel in Linwood (click for STV link).

Firefighters from throughout West Central Scotland tackled the blaze for hours before finally bringing it under control. The fire destroyed the two storey wing to the rear of the hotel and Burnfield Demolition carried out the immediate demolition of this dangerous section of the building.

Following discussions with the owners they agreed it would be prudent to demolish the remainder of the building asap, which, it had already scheduled to demolish in 2011.

The building was demolished, superstructure and foundation debris crushed and stockpiled on-site all within the eight schedule.