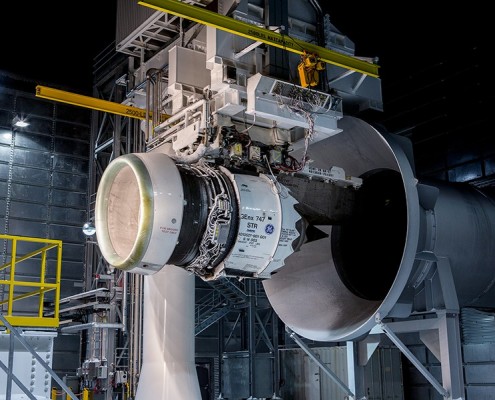 Working in conjunction with Corecut Ltd the client, General Electric, required specialist shoring of their airplane engine testing area within their Glasgow Prestwick International Airport facility. The testing room had to remain operational and accessible for 24 hours, this meant Burnfield Demolition had to design the construction of 8m towers above the access corridor enroute to the testing room. The towers themselves incorporated a crash deck to carry the debris from the concrete ceiling slab which was to be removed.

The slab was cut away by use of Robotic Brokk’s – remote operated machines – due to accessibility and speed. Diamond tipped floor saws were also used to cut through the large areas of concrete.

The roof slab which had an area of 80 metres and was 600mm thick weighed in excess of 100 tonnes and was loaded by hand from the crash deck, down debris chutes to the skips below.

Coffee & Music demolition for Burnfield at the SECC
Scroll to top