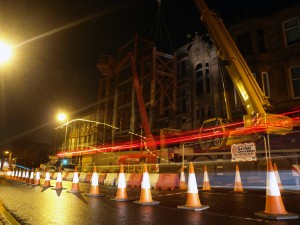 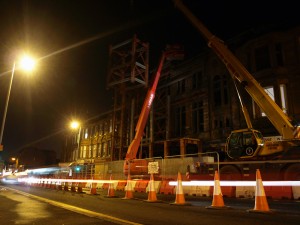 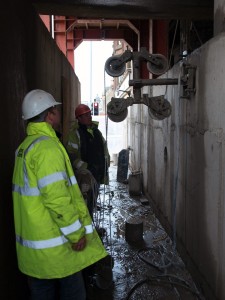 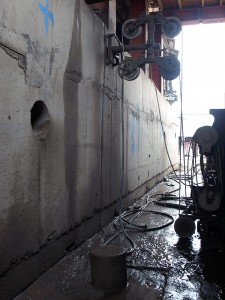 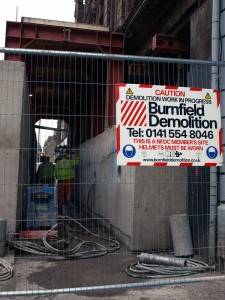 When the new build behind the retained facade is sufficiently developed and tied in the retention system effectively becomes redundant and may be removed. In most instances the front elevation of the building is the retained structure and this presents many difficulties, no more so than in our recent project at Quarry Street in Hamilton.

Tight programming schedules required us to dismantle and remove the facade retention system including the mass pour concrete kentledge within a two week window. To facilitate this we approached South Lanarkshire Council, Highways Department and requested partial road closures to allow crane access. Once granted, our operatives implemented night time lane closures and traffic diversions to allow a 35 tonne all terrain, short rigged crane access to sling and lower the sections of steel frame.

This was successfully completed over four consecutive nights. The mass poured , reinforced concrete kentledge proved to be an equally challenging operation. Concerns over vibration transferring through the stone facade limited the use of hydraulic impact hammers, the solution involved concrete wire sawing the sections adjacent to the stone facade, creating cored lifting points which were slinged out of position prior to the breaking of the concrete.This was completed by our specialist sub contractor Corecut Ltd.

With pedestrians and traffic immediately adjacent to the site protective screens were erected to prevent debris passing outwith the site boundary during the concrete breaking operations. Two weeks later the facade retention system was completely removed, on programme, safely and without any impact on the surrounding neighbours.